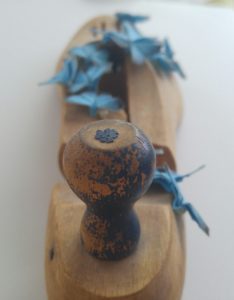 Okay, this is actually a pretty personal and touching story. So back in 2013 I was having pretty much the worst year imaginable. I was in and out of hospitals, until one day I end up in the ICU, and then on a psych ward for a suicide attempt. My psychiatrist pushed me really hard to make the decision to stay alive, despite the pain. He told me I needed to make a commitment to life. In the end it made my life simpler, and I have a lot to be thankful for because of this doctor.

So, like, this sculpture is his fucking spirit or something. What? I just told you a really important life story and you want some more explanations? Fine.

Origami paper was available on the ward, so I ended up making huge numbers of origami butterflies. The paper on these suckers is not acid free, so expect these fellows to discolor and wither a bit. It’s cool though. That’s the aging process in everyone’s life, and because of this guy, I have an aging process too. Metaphor about walking down a road. Never mind. you guys are smart. You can figure out the visual metaphors and intentions for yourselves.